Detailed Product Description
A rapid test for the qualitative detection of circulating plasmodium falciparum (P.f.) in whole  blood. For professional in vitro diagnostic use only

Malaria is caused by a protozoan which invades human red blood cells. Malaria is one of the world’s most prevalent diseases. According to the WHO, the worldwide prevalence of the disease is estimated to be 300-500 million cases and over 1 million deaths each year. Most of these victims are infants, young children. Over half of the world’s population lives in malarious areas. Microscopic analysis of appropriately stained thick and thin blood smears has been the standard diagnostic technique for identifying malaria infections for more than a century. 2 The technique is capable of accurate and reliable diagnosis when performed by skilled microscopists using defined protocols. The skill of the microscopist and use of proven and defined procedures, frequently present the greatest obstacles to fully achieving the potential accuracy of microscopic diagnosis.
Although there is a logistical burden associated with performing a time-intensive, labor-intensive, and equipment-intensive procedure such as diagnostic microscopy, it is thetraining required to establish and sustain competent performance of microscopy thatposes the greatest difficulty in employing this diagnostic technology.
The Malaria P.f. Rapid Test Cassette (Whole Blood) is a rapid test to qualitatively detectthe presence of the P.f. antigen. The test utilizes colloid gold conjugate to selectivelydetect P.f. antigen in whole blood.

Allow the test, specimen, buffer and/or controls to reach room temperature (15- 30°C) prior to testing.
1. Open the pouch, remove out the test cassette. Twist off the tab of the buffer vial without squeezing. Then place it on a clean and level surface.
2. Carefully pull of the sterile lancet cap.
3. Use the provided alcohol swab to clean the puncture site.
4. Push the sterile lancet firmly into the chosen site. Let a large drop of free flowing blood collect at the puncture site. To increase blood flow, use the thumb and forefinger to gently apply pressure around the puncture site.
5. Add the blood specimen to the test cassette using the disposable dropper provided.
6. Hold the dropper vertically; draw the specimen up to the Fill Line as shown in illustration below (approximately 10 μl). Transfer the specimen to the specimen well, then add the entire buffer, and start the timer.
7. Wait for the colored line(s) to appear. Read results at 10 minutes. Do not interpret the result after 20 minutes. 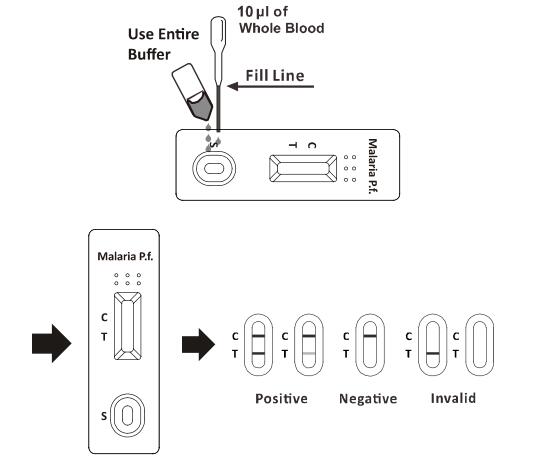