Detailed Product Description
A rapid, one step test for the qualitative detection of norovirus, rotavirus, adenovirus and astrovirus in human feces.

The Combo Test comprises of 3 parts, viz., Norovirus, Rotavirus/ Adenovirus and Astrovirus. The details for each part are given below.
The Norovirus Rapid Test (Feces) is a rapid chromatographic immunoassay for the qualitative detection of norovirus in human fecal specimen. The test utilizes antibody specific for norovirus to selectively detect norovirus in human fecal specimens.
Noroviruses (NoV) are a genetically diverse group of single stranded RNA, nonenvelopped viruses belonging to the Caliciviridae family. Initially four antigenic types of SRSV were recognized, but more recently three genogroups have been identified with the genus Norovirus. Genogroup 1 and Genogroup 2 are associated with human infections whilst Genogroup 3 is associated with bovine and porcine infection. Noroviruses are a major cause of acute gastroenteritis worldwide, often causing explosive outbreaks in institutions. They are highly contagious, with an inoculum of as few as ten particles being able to cause infection. Transmission occurs through ingesting contaminated
food and water and by person-to-person spread. Transmission is predominantly faecal-oral but may be airborne due to aerosolisation of vomitus, which typically contains abundant infectious virus particles. Outbreaks may involve several routes of transmission. The illness is acute, usually mild, although it has caused fatalities among the frail elderly, and self-limiting and follows an incubation period of 24-48 hours although cases can occur within 12 hours of exposure.
The symptoms of Norovirus illness usually include nausea, vomiting, diarrhea, and some stomach cramping. Sometimes people additionally have a low-grade fever, chills, headache, muscle aches, and a general sense of tiredness. The illness often begins suddenly, and the infected person may feel very sick. In most people the illness is self-limiting with symptoms lasting for about 1 or 2 days.
The Rotavirus and Adenovirus Combo Rapid Test (Feces) is a rapid chromatographic immunoassay for the qualitative detection of rotavirus and adenovirus in human fecal specimen, providing results in 10 minutes. The test utilizes antibody specific for rotavirus and adenovirus to selectively detect rotavirus and adenovirus from human fecal specimens.
Acute diarrheal disease in young children is a major cause of morbidity worldwide and is a leading cause of mortality in developing countries.1 Rotavirus is the most common agent responsible for acute gastroenteritis, mainly in young children.2 Its discovery in 1973 and its association with infantile gastroenteritis represented a very important advancement in the study of gastroenteritis not caused by acute bacterial infection. Rotavirus is transmitted by oral-fecal route with an incubation period of 1-3 days. Although specimen collections taken within the second and fifth day of the illness are ideal for antigen detection, the rotavirus may still be found while diarrhea continues. Rotaviral gastroenteritis may result in mortality for populations at risk such as infants, the elderly and immunocompromised patients.3In temperate climates, rotavirus infections occur mainly in the winter months. Endemics as well as epidemics affecting some thousand people have been reported.4 With hospitalized children suffering from acute enteric disease up to 50% of the analyzed specimen were positive for rotavirus.5The viruses replicate in the cell nucleus and tend to be host species specific producing a characteristic cytopathic effect (CPE).
Research has shown that enteric adenoviruses, primarily Ad40 and Ad41, are a leading cause of diarrhea in many of these children, second only to the rotaviruses.6,7,8,9 These viral pathogens have been isolated throughout the world, and can cause diarrhea in children year round. Infections are most frequently seen in children less than two years of age, but have been found in patients of all ages. Further studies indicate that adenoviruses are associated with 4 - 15% of all hospitalized cases of viral gastroenteritis.5,6,7,8,9 Rapid and accurate diagnosis of gastroenteritis due to adenovirus is helpful in establishing the etiology of gastroenteritis and related patient management.
The Astrovirus Rapid Test (Feces) is a rapid chromatographic immunoassay for the qualitative detection of astrovirus in human fecal specimen. The test utilizes antibody specific for astrovirus to selectively detect astrovirus from human fecal specimens.Astrovirus is a type of virus that was first discovered in 1975 using electron microscopes following an outbreak of diarrhea in humans.10 Astroviruses are 28–35 nm diameter, icosahedral viruses that have a characteristic five- or sixpointed star-like surface structure when viewed by electron microscopy. Along with the Picornaviridae and the Caliciviridae, the Astroviridae comprise a third family of nonenveloped viruses whose genome is composed of plus-sense, single-stranded RNA. 11 Astrovirus has a non-segmented, single stranded, positive sense RNA genome within a non-enveloped icosahedral capsid.12 Human astroviruses have been shown in numerous studies to be an important cause of gastroenteritis in young children worldwide. 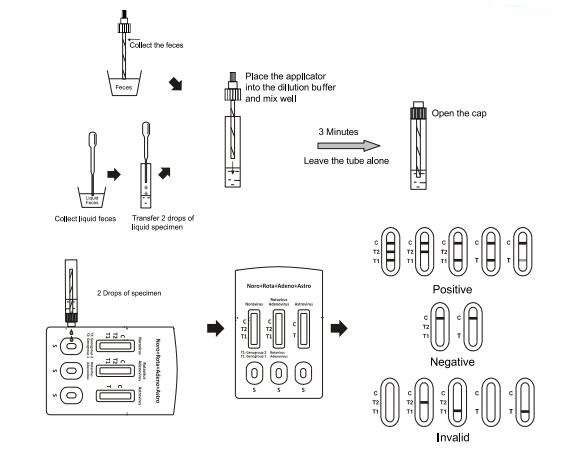