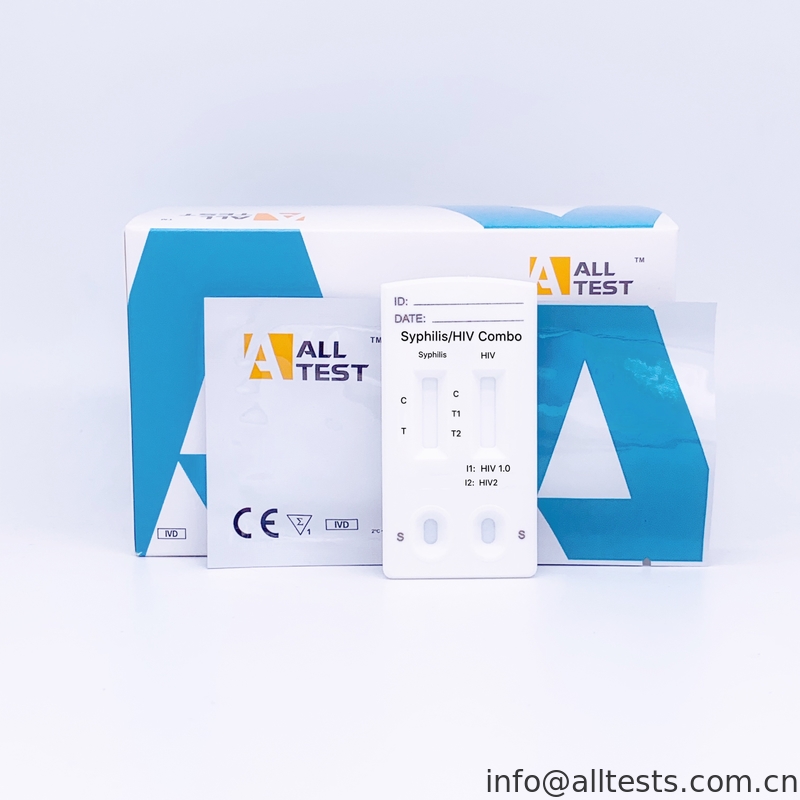 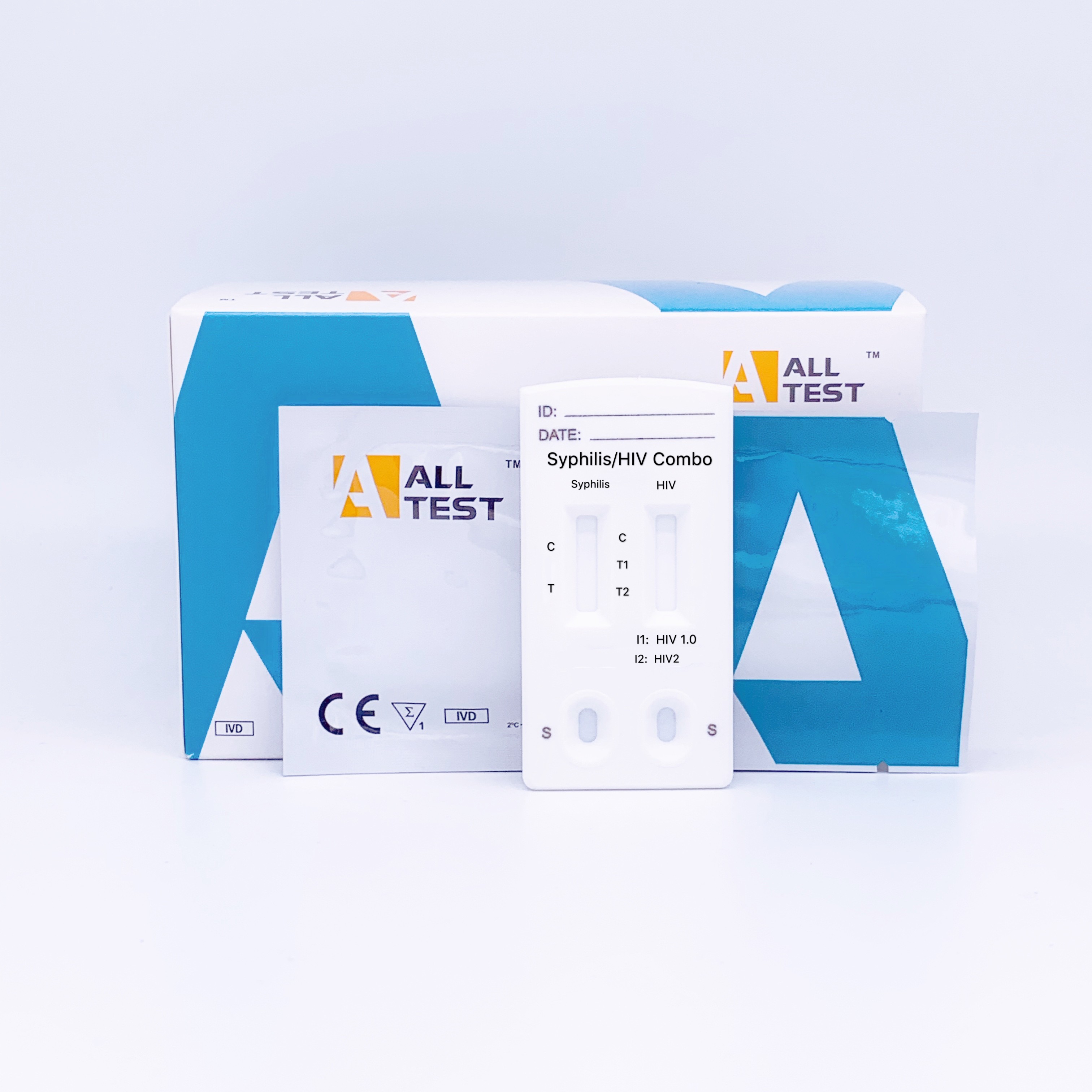 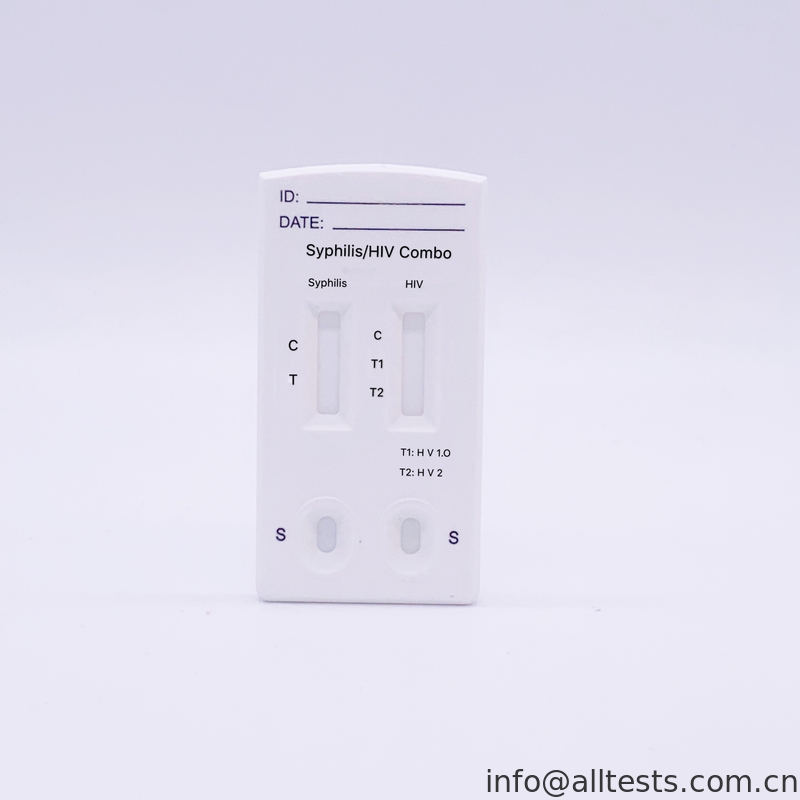 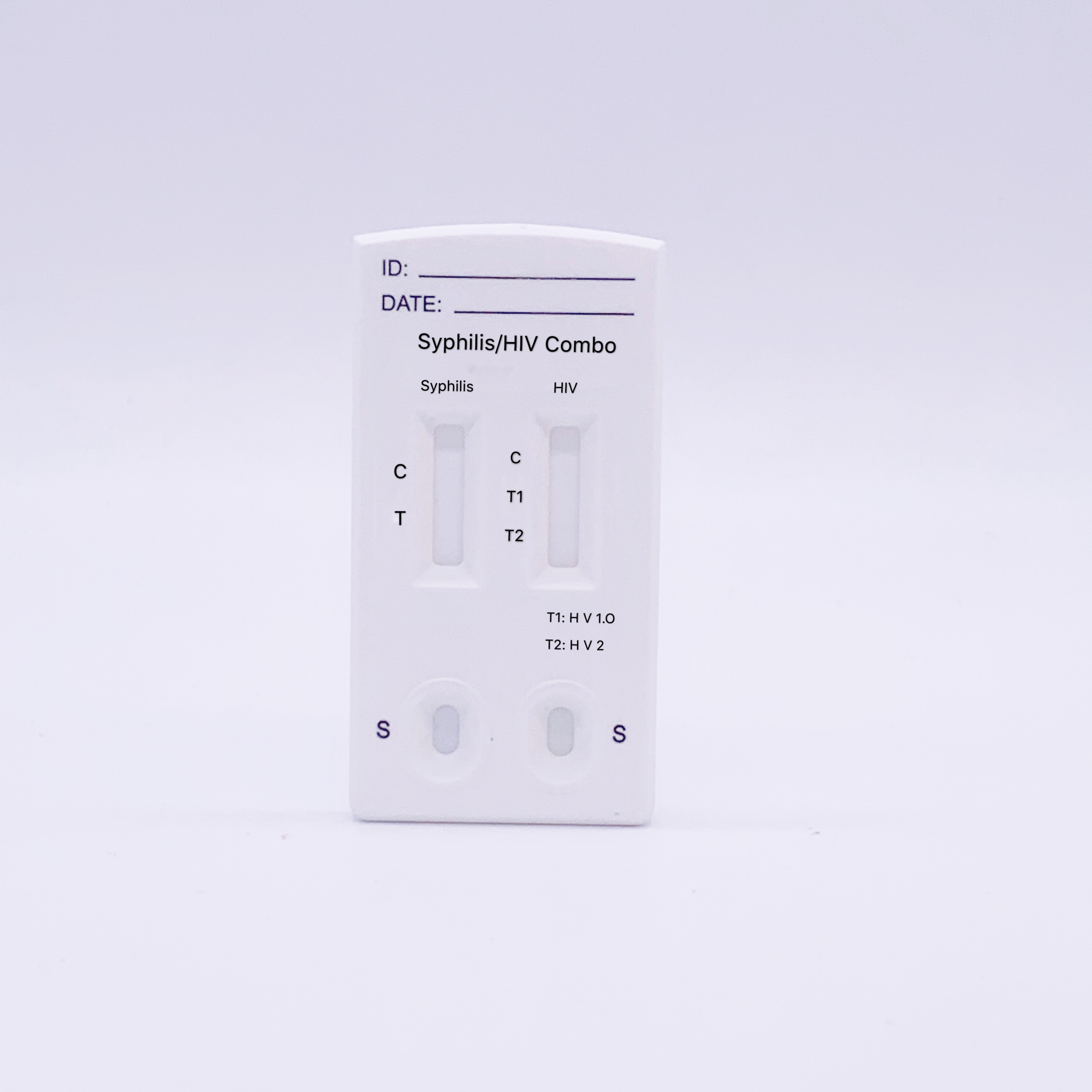 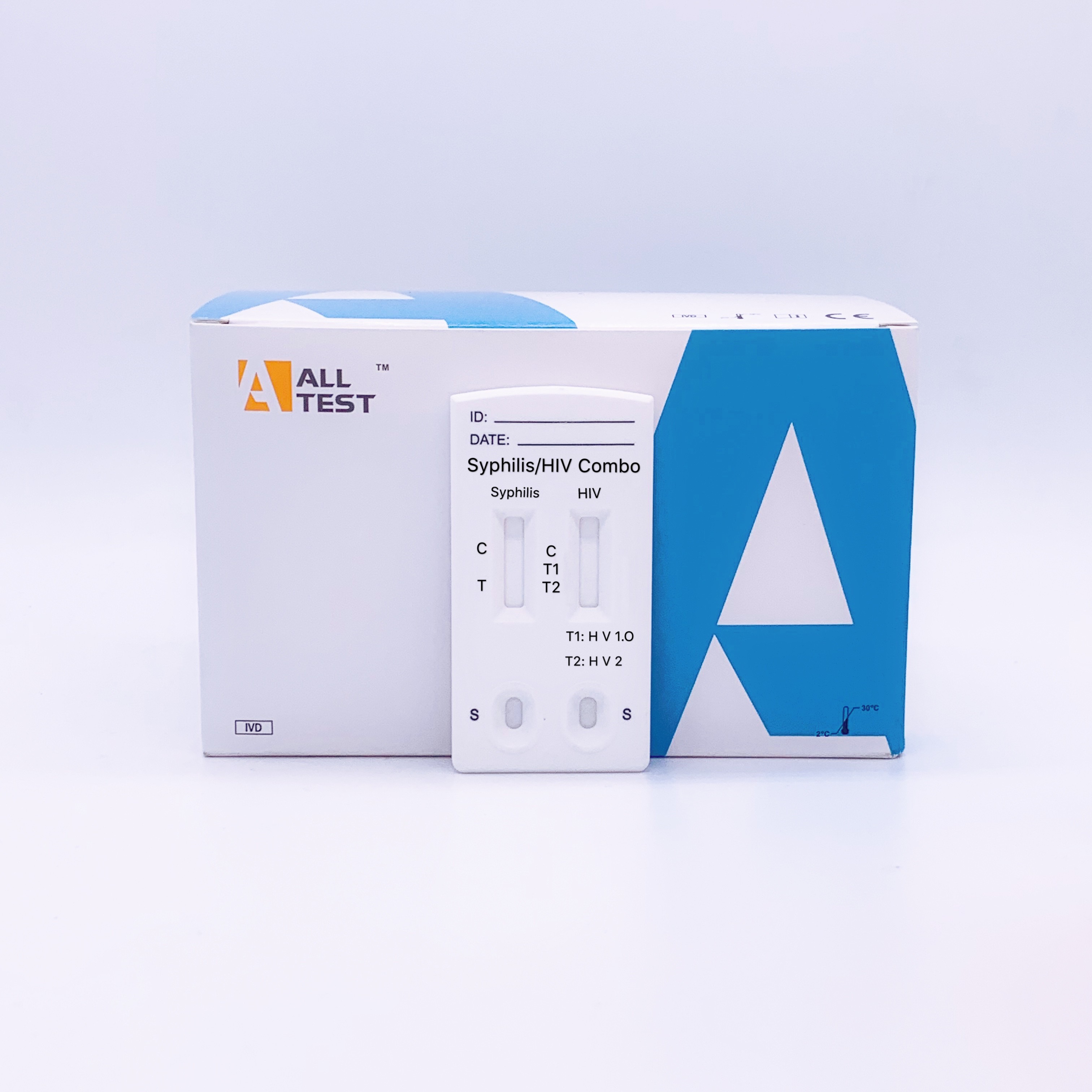 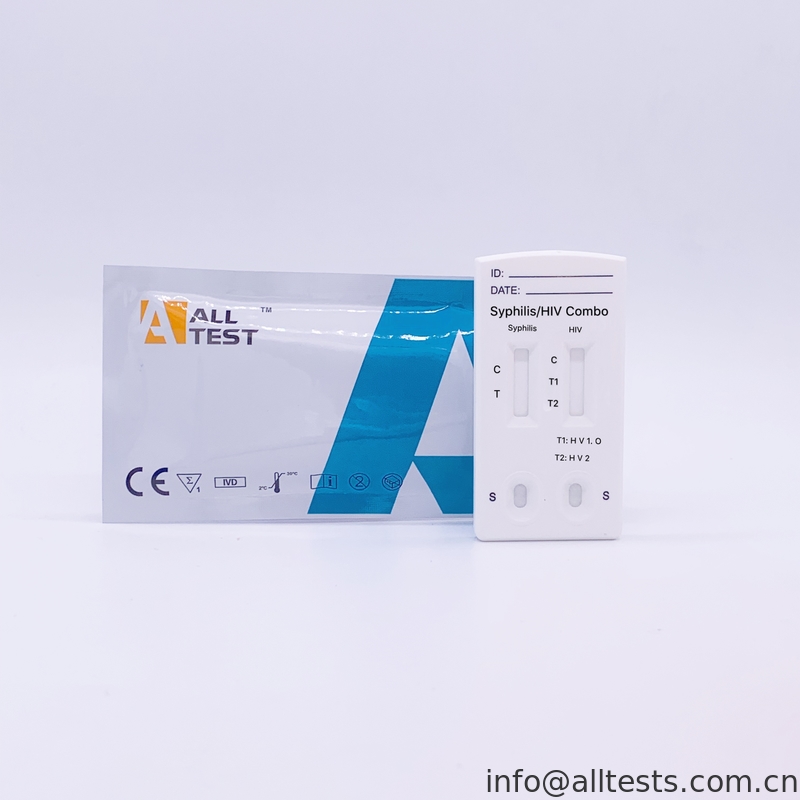 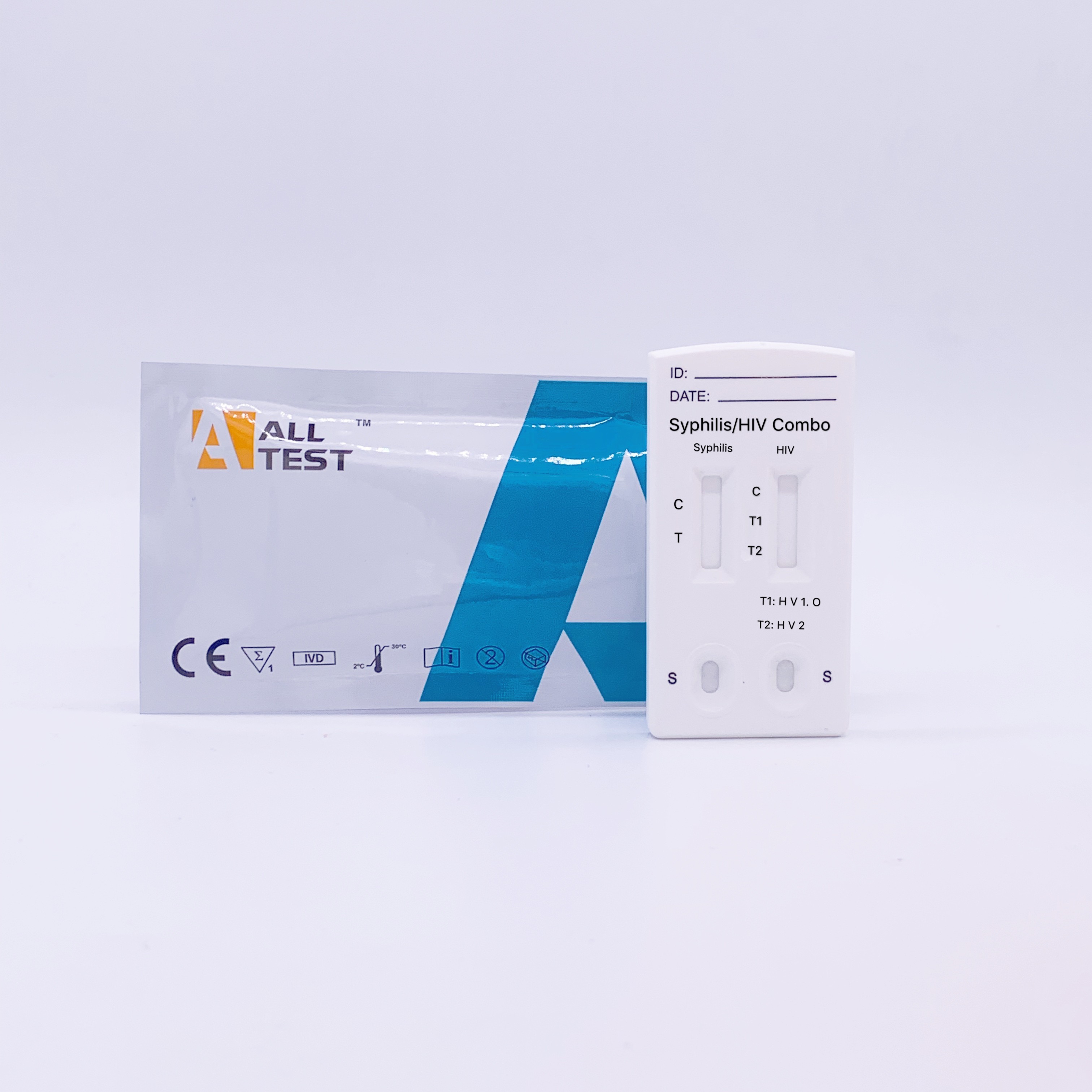 The Syphilis/HIV 1.2.O Combo Rapid Test Cassette (Serum /Plasma) is a rapid chromatographic immunoassay for the qualitative detection of antibodies to HIV type 1, type 2, subtype O and syphilis- antibodies (IgG and IgM) to Treponema Pallidum (TP) in serum or plasma.

Description:
The HIV 1.2.O Rapid Test (Whole Blood/Serum/Plasma): HIV (Human Immunodeficiency Virus) is the etiologic agent of Acquired Immune Deficiency Syndrome (AIDS). The virion is surrounded by a lipid envelope that is derived from the host cell membrane. Several viral glycoproteins are on the envelope. Each virus contains two copies of positive-sense genomic RNAs. HIV-1 has been isolated from patients with AIDS and AIDS-related complex, and from healthy people with high potential risk for developing AIDS. HIV-1 consists of Subtype M and Subtype O. Highly divergent strains of HIV-1 were first recognized in 1990 and grouped provisionally as Subtype O as this variation has similar glycoprotein markers to HIV-1 but a slight variation to the protein marker. Although rarely compared to HIV-1 and HIV-2, infections caused by Subtype O have so far been identified in Africa (Cameroon), France and Germany. HIV-2 has been isolated from West African AIDS patients and from seropositive asymptomatic individuals. HIV-1, HIV-2, and Subtype O all elicit immune responses. Detection of HIV antibodies in serum, plasma or whole blood is the most efficient and common way to determine whether an individual has been exposed to HIV and to screen blood and blood products for HIV. 4 Despite the differences in their biological characters, serological activities and genome sequences, HIV-1, HIV-2, and Subtype O show strong antigenic cross-reactivity. Most HIV-2 positive sera can be identified by using HIV-1 based serological tests.
The Syphilis Rapid Test (Whole Blood/Serum/Plasma) utilizes a double antigen combination of a Syphilis antigen coated particle and Syphilis antigen immobilized on membrane to detect TP antibodies (IgG and IgM) qualitatively and selectively in whole blood, serum or plasma.
Treponema Pallidum (TP) is the causative agent of the venereal disease Syphilis. TP is a spirochete bacterium with an outer envelope and a cytoplasmic membrane. Relatively little is known about the organism in comparison with other bacterial pathogens. According to the Center for Disease Control (CDC), the numbers of cases of Syphilis infection has markedly increased since 1985. Some key factors that have contributed to this rise include the crack cocaine epidemic and the high incidence of prostitution among drug users. One study reported a substantial epidemiological correlation between the acquisition and transmission of the HIV virus and Syphilis. Multiple clinical stages and long periods of latent, asymptomatic infection are characteristic of Syphilis. Primary Syphilis is defined by the presence of a chancre at the site of inoculation. The antibodies response to the TP bacterium can be detected within 4 to 7 days after the chancre appears. The infection remains detectable until the patient receives adequate treatment.

*NOTE: The intensity of the color in the test line region (T) will vary depending on the concentration of HIV antibodies or Syphilis antibodies present in the specimen. Therefore, any shade of red in the test region should be considered positive.