The HbA1c Rapid Test Cassette (Whole Blood) is a rapid chromatographic immunoassay for the semi-quantitative estimation of human HbA1c in whole blood as an aid in the monitoring of diabetes mellitus.

Glycated hemoglobin (hemoglobin A1c, HbA 1c , A1C, or Hb 1c ; sometimes also referred to as being Hb1c or HGBA1C) is a form of hemoglobin that is measured primarily to identify the three-month average plasma glucose concentration. The test is limited to a three-month average because the lifespan of a red blood cell is four months (120 days).
However, since red blood cells do not all undergo lysis at the same time, HbA1c is taken as a limited measure of three months. It is formed in a non-enzymatic glycation pathway by hemoglobin's exposure to plasma glucose.
HbA 1c is a measure of the beta-N-1-deoxy fructosyl component of hemoglobin. 1 The origin of the naming derives from Hemoglobin type A being separated on cation exchange chromatography. The first fraction to separate, probably considered to be pure Hemoglobin A, was designated HbA 0 , the following fractions were designated HbA 1a , HbA 1b , and HbA 1c , respective of their order of elution. There have subsequently been many more sub fractions as separation techniques have improved. 2 Normal levels of glucose produce a normal amount of glycated hemoglobin. As the average amount of plasma glucose increases, the fraction of glycated hemoglobin increases in a predictable way. This serves as an indicator that blood sugar is increasing and that action should be taken.
In diabetes mellitus, higher amounts of glycated hemoglobin, indicating poorer control of blood glucose levels, have been associated with cardiovascular disease, nephropathy, neuropathy, and retinopathy. A trial on a group of patients with Type 1 diabetes found that monitoring by caregivers of HbA 1c led to changes in diabetes treatment and improvement of metabolic control compared to monitoring only of blood or urine glucose. However, a trial designed specifically to determine whether reducing HbA 1c below the normal 6%, using primarily insulin and sulfonylureas (both known to easily drive blood sugar too low), would reduce the rate of cardiovascular events in type 2 diabetes found higher mortality—the trial was terminated early. 4 The negative outcomes may well have been a result of the treatment approach, primarily insulin and sulfonylureas, utilized in the "intensive" treatment group instead of LCHF (Low-Carbohydrate High Fat diet), GlP-1 analogues & SGLT-2 inhibitors, none of which have these problems & lower cardiovascular mortality.

Bring tests, specimens, buffer, and/or controls to room temperature (15-30 °C) before use.
1. Remove the test cassette from its sealed pouch, and place it on a clean, level surface. For best results, the assay should be performed within one hour.
2. Open the tube with the diluted sample. Transfer 3 drops (approx. 120 μl) of diluted sample to sample well. Start the timer.
3. Wait for the colored lines to appear. The result should be read at 10 minutes. Do not interpret the results at 20 minutes. 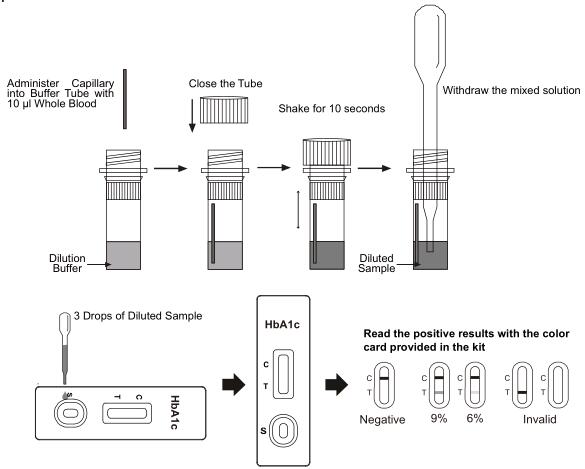