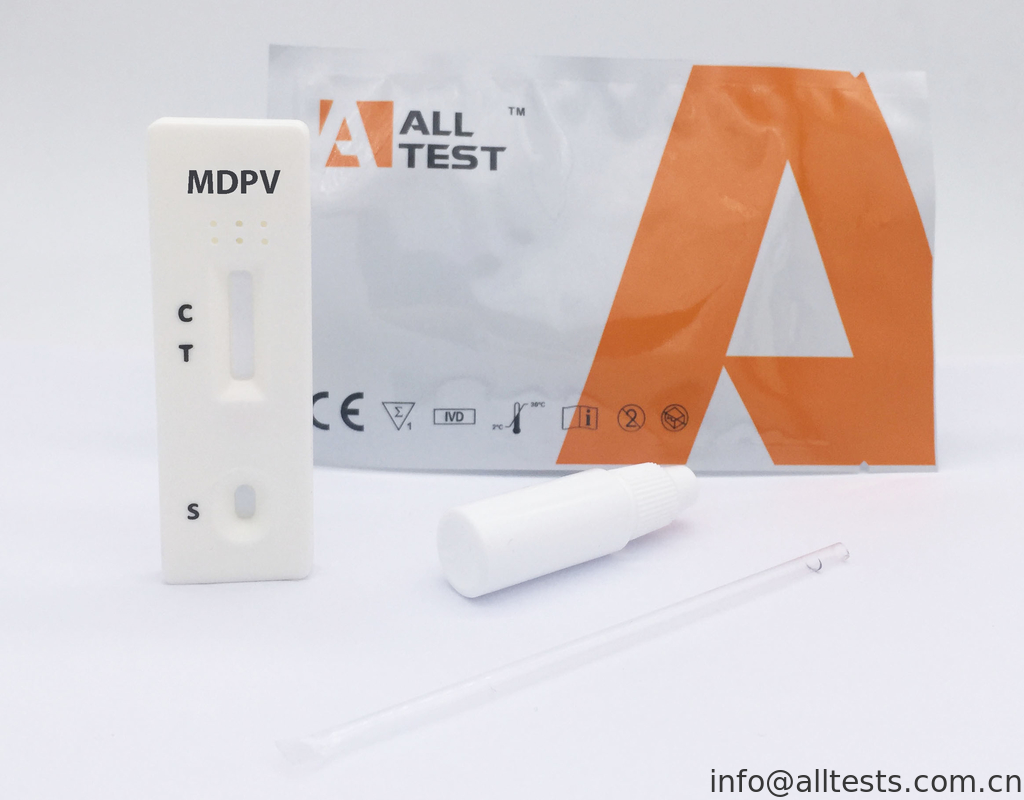 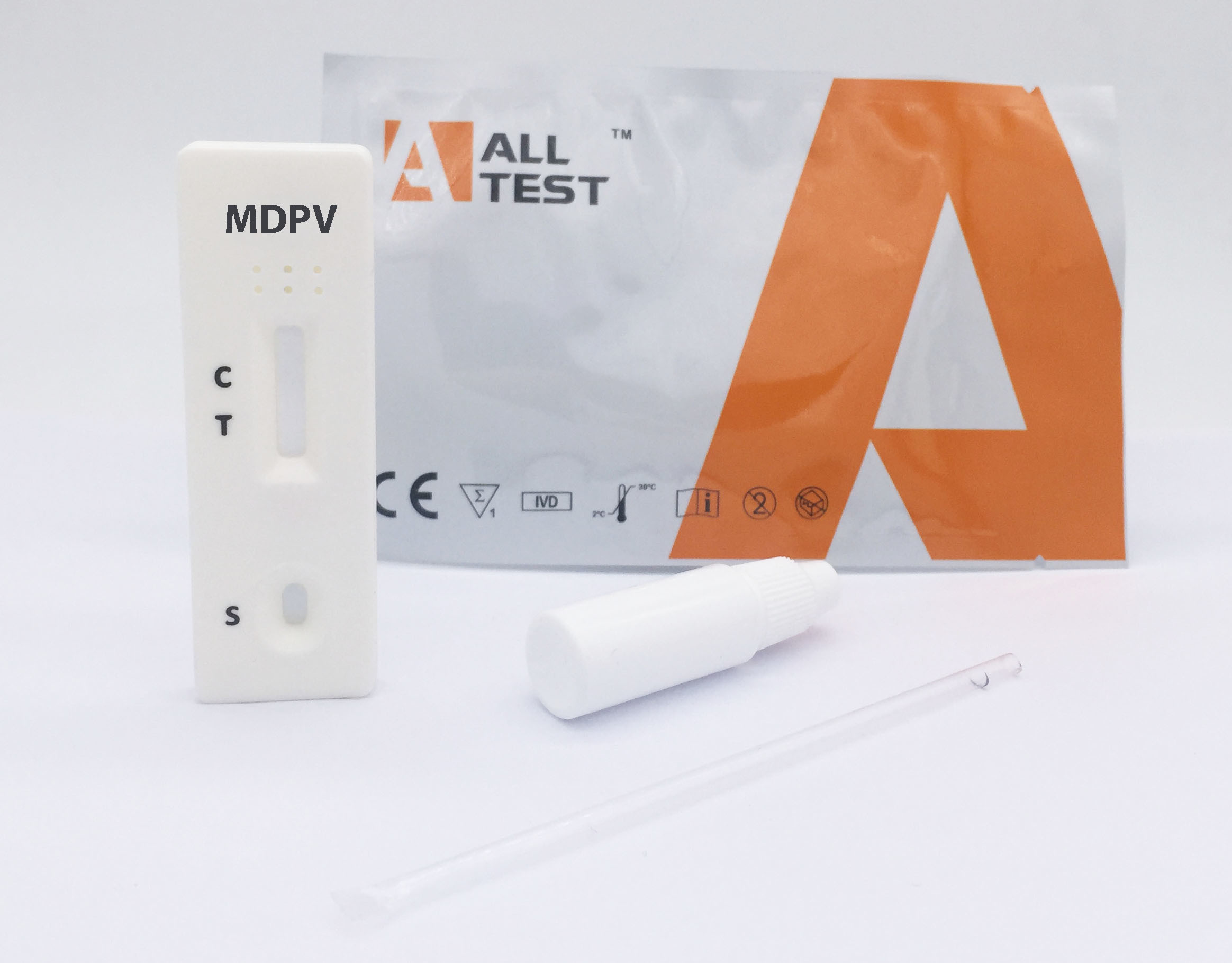 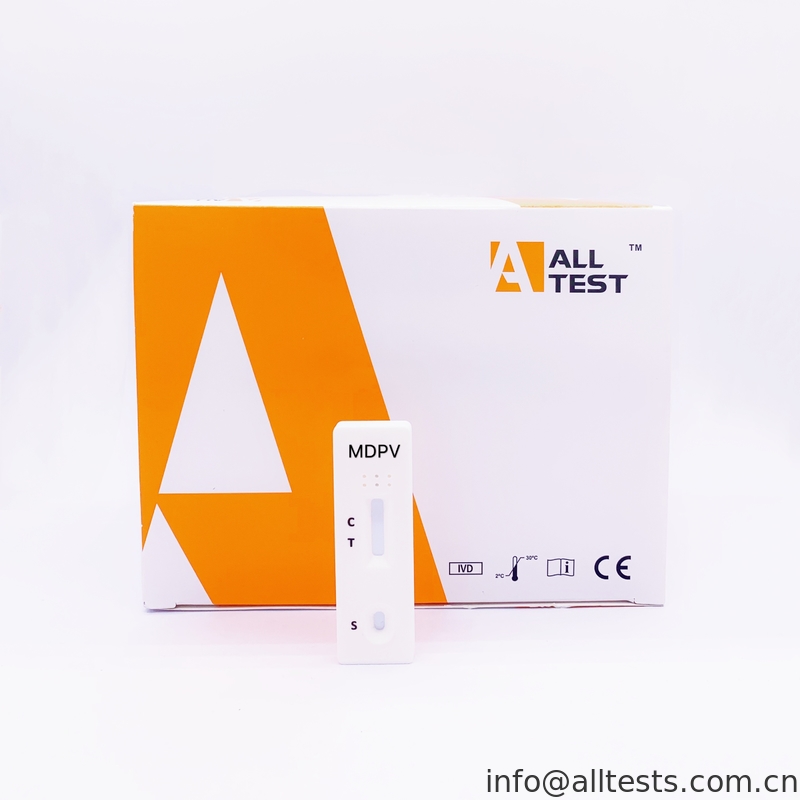 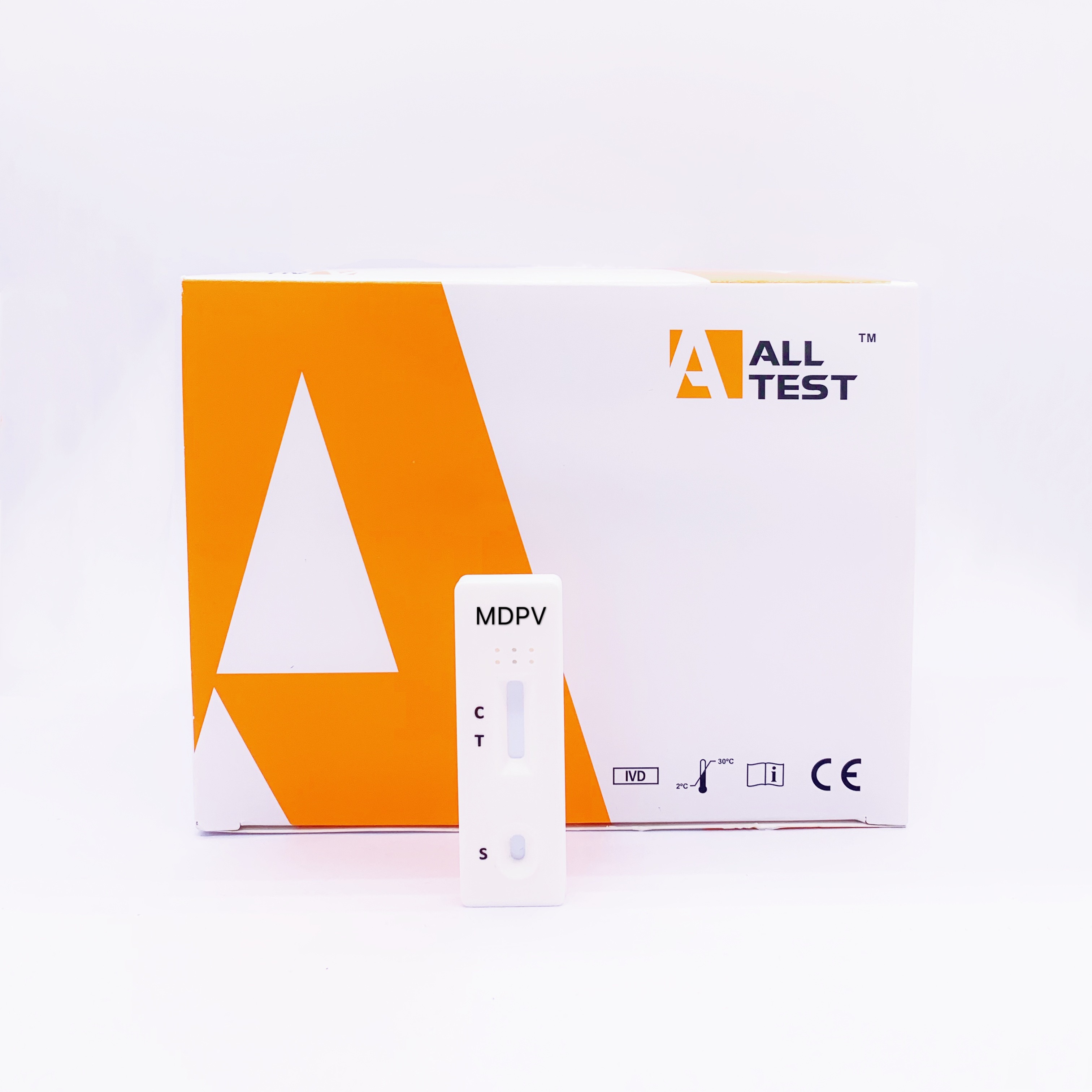 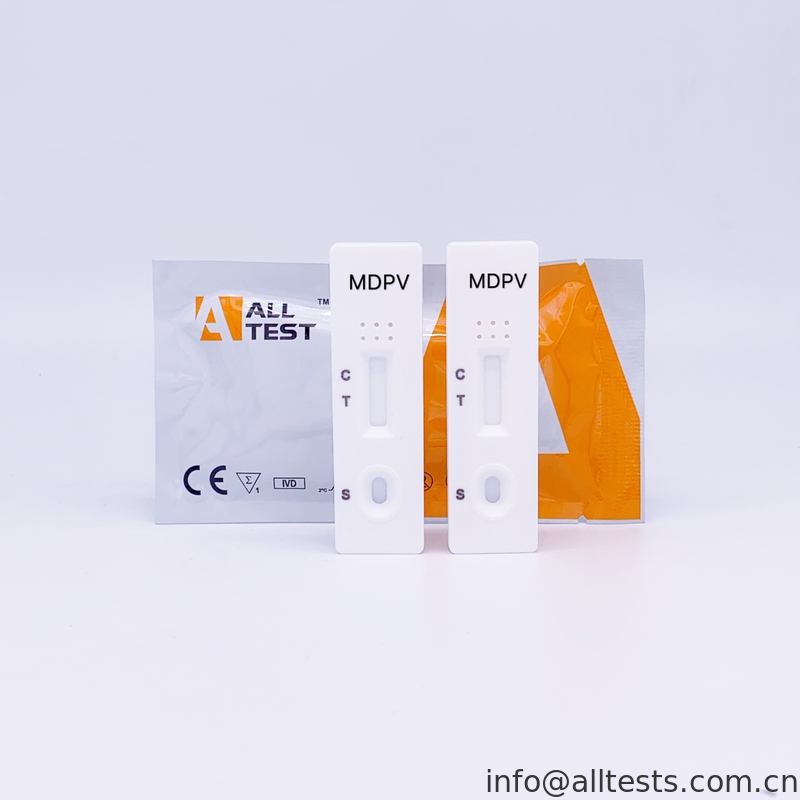 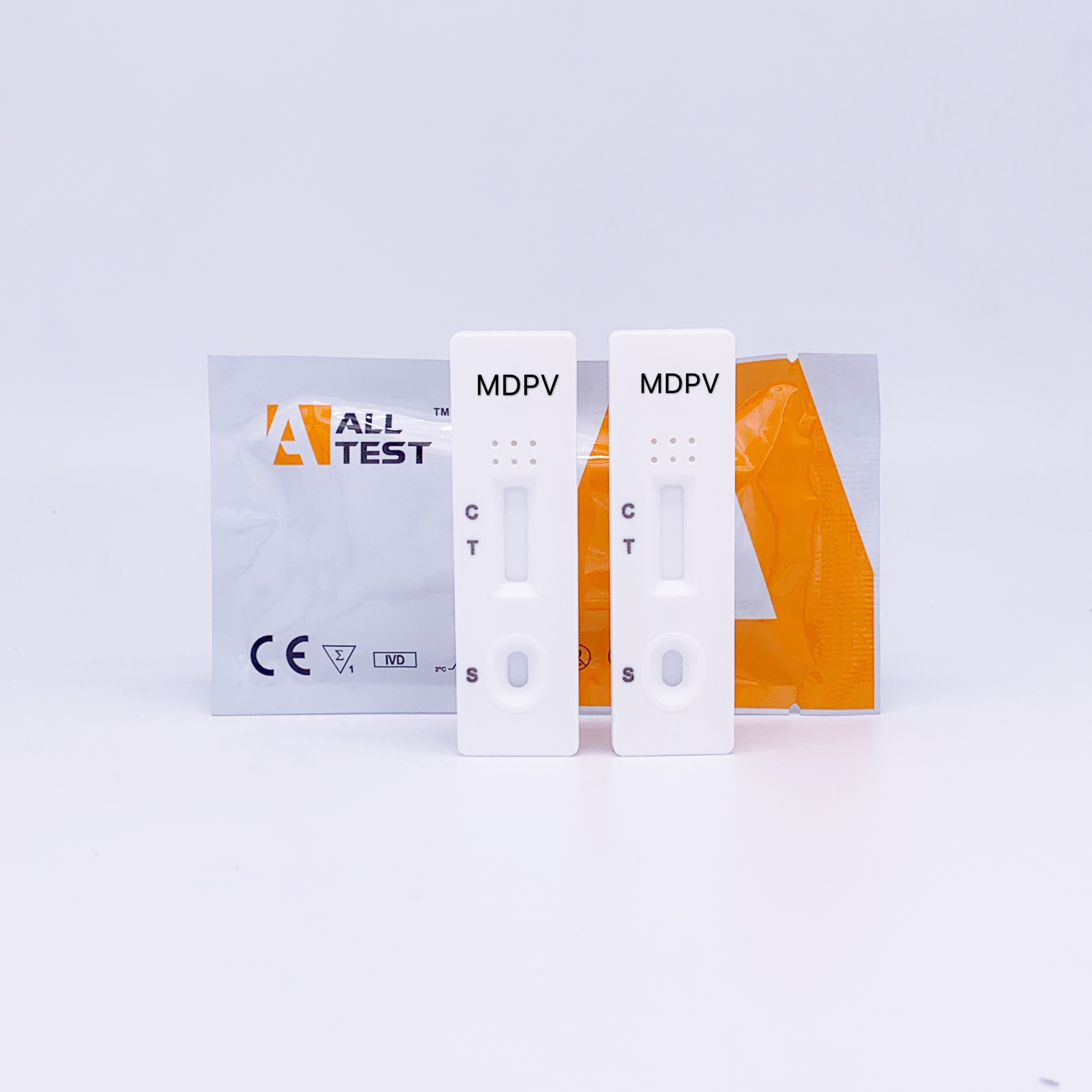 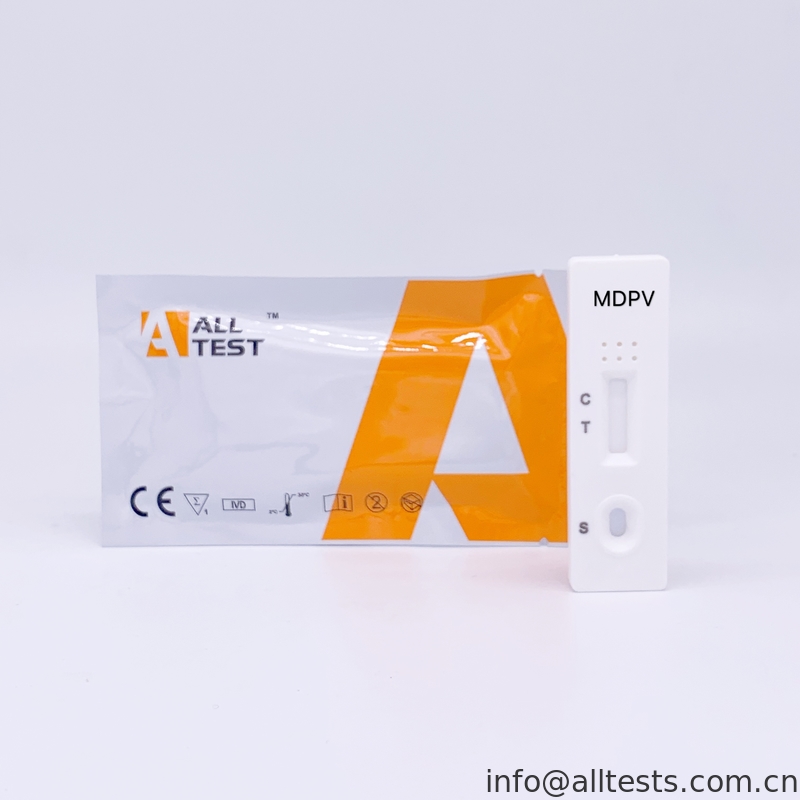 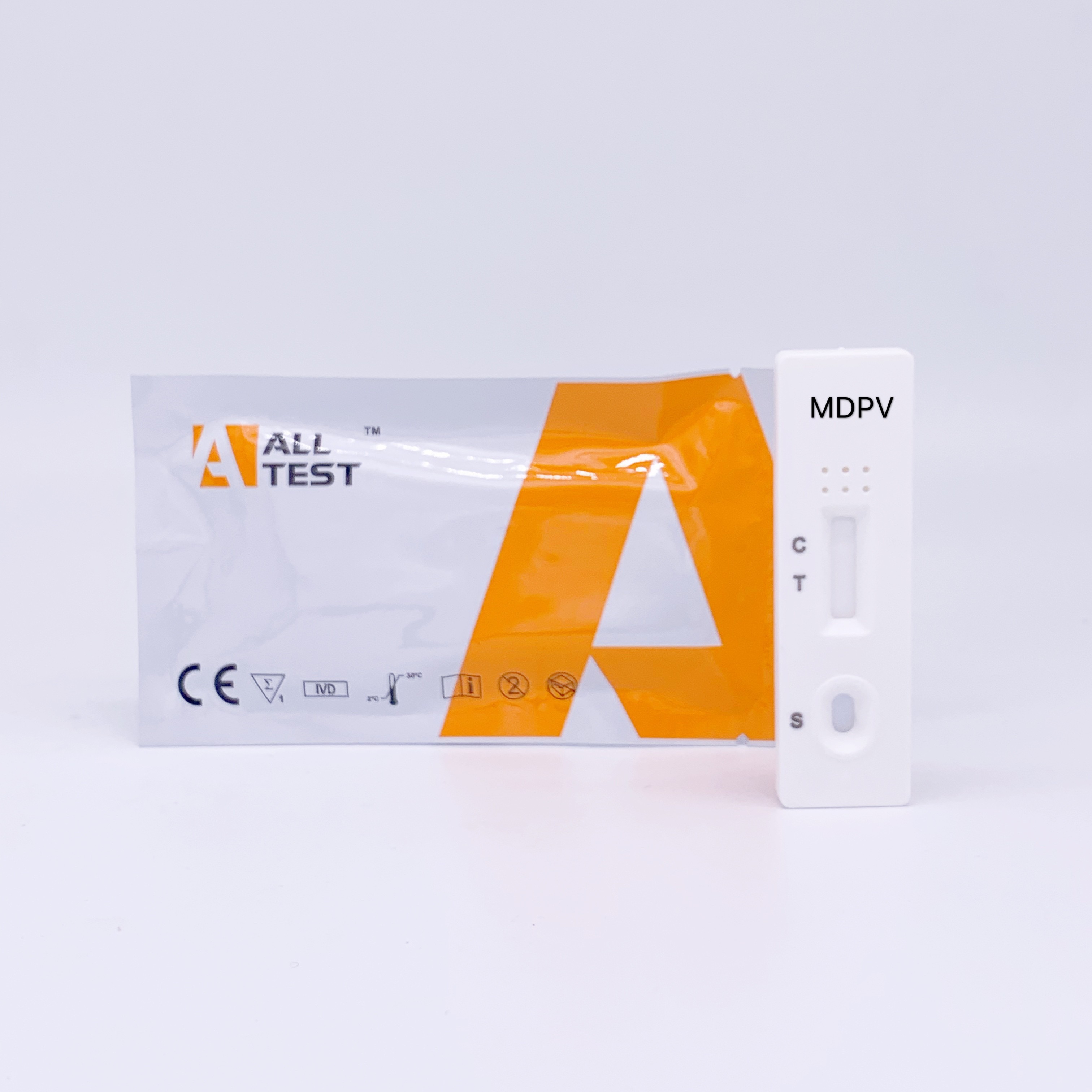 The 3,4-methylenedioxypyrovalerone (MDPV) Rapid Test Panel (Powder) is a rapid immunochromatographic assay for the qualitative detection of MDPV.
This assay provides only a preliminary analytical test result. A more specific alternate chemical method must be used in order to obtain a confirmed analytical result. Gas chromatography/mass spectrometry (GC/MS) is the preferred confirmatory method. Clinical consideration and
professional judgment should be applied to any drug of abuse test result, particularly when preliminary positive results are used.

3, 4-methylenedioxypyrovalerone (MDPV) is a psychoactive recreational drug with stimulant properties which acts as a norepinephrine-dopamine reuptake inhibitor (NDRI). It was first developed in the 1960s by a team at Boehringer Ingelheim. MDPV remained an obscure stimulant until around 2004 when it was reportedly sold as a designer drug. Products labeled as bath salts containing MDPV were previously sold as recreational drugs in gas stations and convenience stores in the United States, similar to the marketing for Spice and K2 as incense.MDPV is the 3,4-methylenedioxy ring-substituted analog of the compound pyrovalerone, developed in the 1960s, which has been used for the treatment of chronic fatigue and as an anorectic, but caused problems of abuse and dependence. However, despie its structural similarity, the effects of MDPV bear little resemblance to other methylenedioxy phenylalkylamine derivatives such as 3,4-methylenedioxy-N-methylamphetamine (MDMA), instead producing primarily stimulant effects with only mild entactogenic qualities.

MDPV undergoes CYP450 2D6, 2C19, 1A2, and COMT phase 1 metabolism (liver) into methylcatechol and pyrrolidine, which in turn are glucuronated (uridine 5'-diphospho-glucuronosyl transferase)  allowing it to be excreted  by the kidneys, with only  a small fraction of the  metabolites  being excreted into the stools. No free pyrrolidine will be detected in the urine.

The MDPV Rapid Test Dipstick (Urine) is a rapid urine screening test that can be performed without the use of an instrument. The test utilizes a monoclonal antibody to selectively detect elevated levels of 3,4methylenedioxypyrovalerone in urine. The MDPV Rapid Test Dipstick (Urine) yields a positive result when  3,4-methylenedioxypyrovalerone in urine exceeds 1000ng/mL

For whole blood specimen:
4. Bring the pouch to room temperature before opening it. Remove the test cassette from the sealed pouch and use it as soon as possible.
5. Place the cassette on a clean and level surface.
For Venipuncture Whole Bloodspecimen:
 Hold the dropper vertically and transfer 1 drop of whole blood(approximately 40μl) to the specimen well, then add 2 drops of buffer (approximately 80μl), and start the timer. See illustration below.
For Fingerstick Whole Blood specimen:
 To use a capillary tube: Fill the capillary tube and transfer approximately 40μl of fingerstick whole blood specimen to the specimen area of test cassette, then add2 drops of buffer(approximately 80μl) and start the timer. See illustration below.
6. Wait for the colored line(s) to appear. Read results at 5 minutes. Do not interpret the result after 10 minutes.

*NOTE: The shade of color in the test line region (T) will vary, but it should be considered negative whenever there is even a faint colored line.

INVALID: Control line (C) fails to appear. Insufficient specimen volume or incorrect procedural techniques are the most likely reasons for control line failure. Review the procedure and repeat the test using a new test. If the problem persists, discontinue using the lot immediately and contact your local distributor.