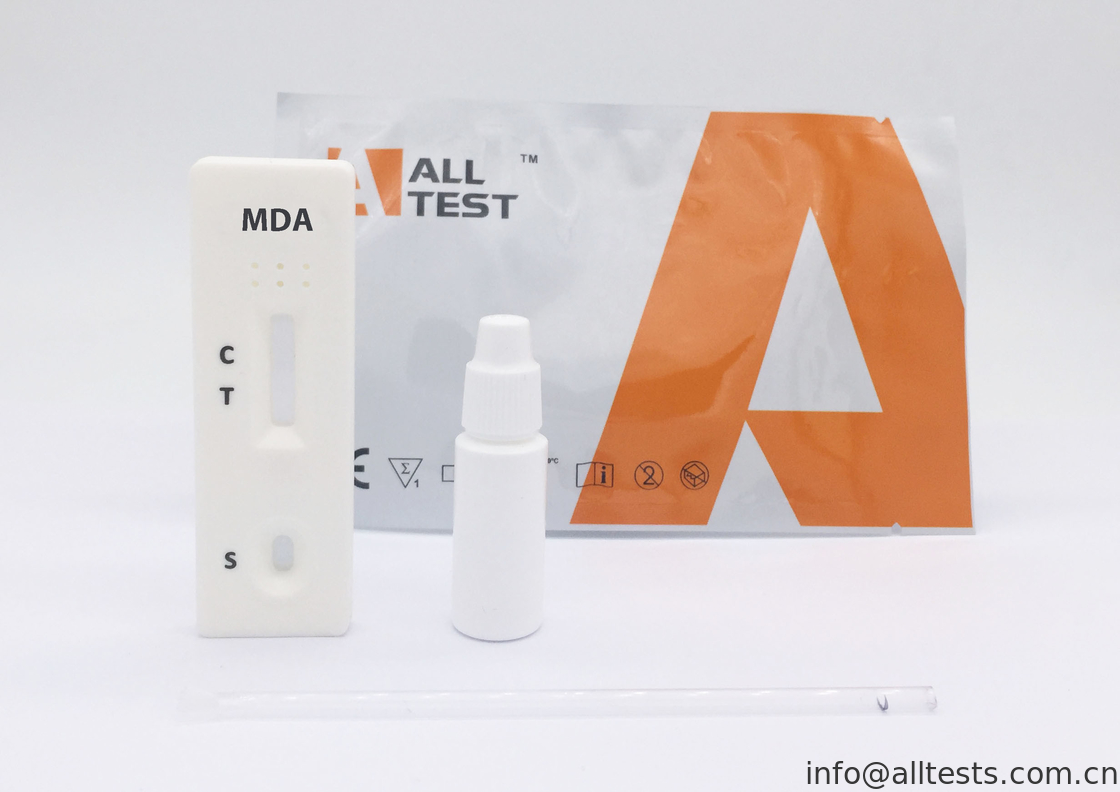 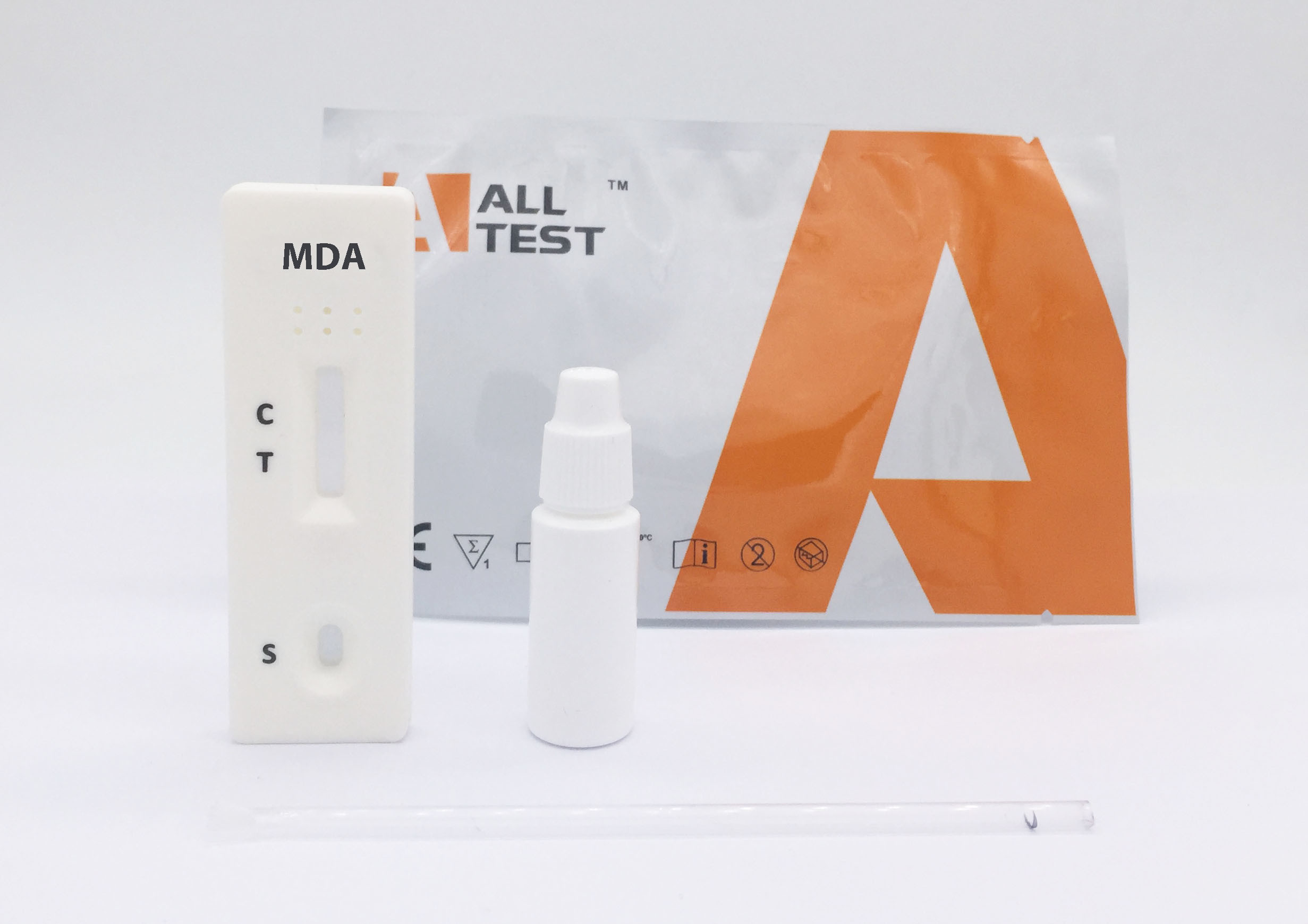 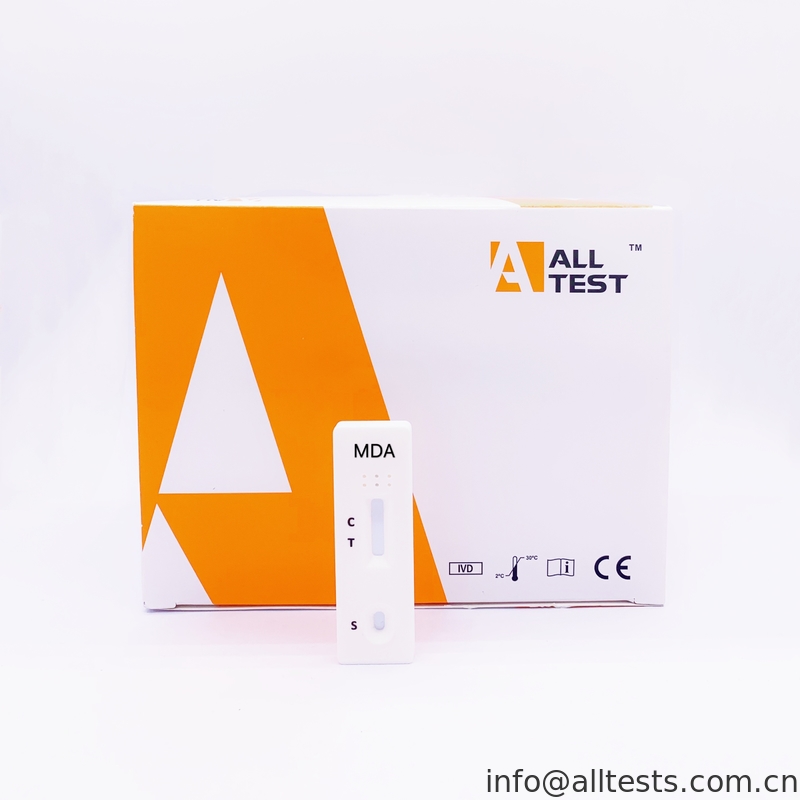 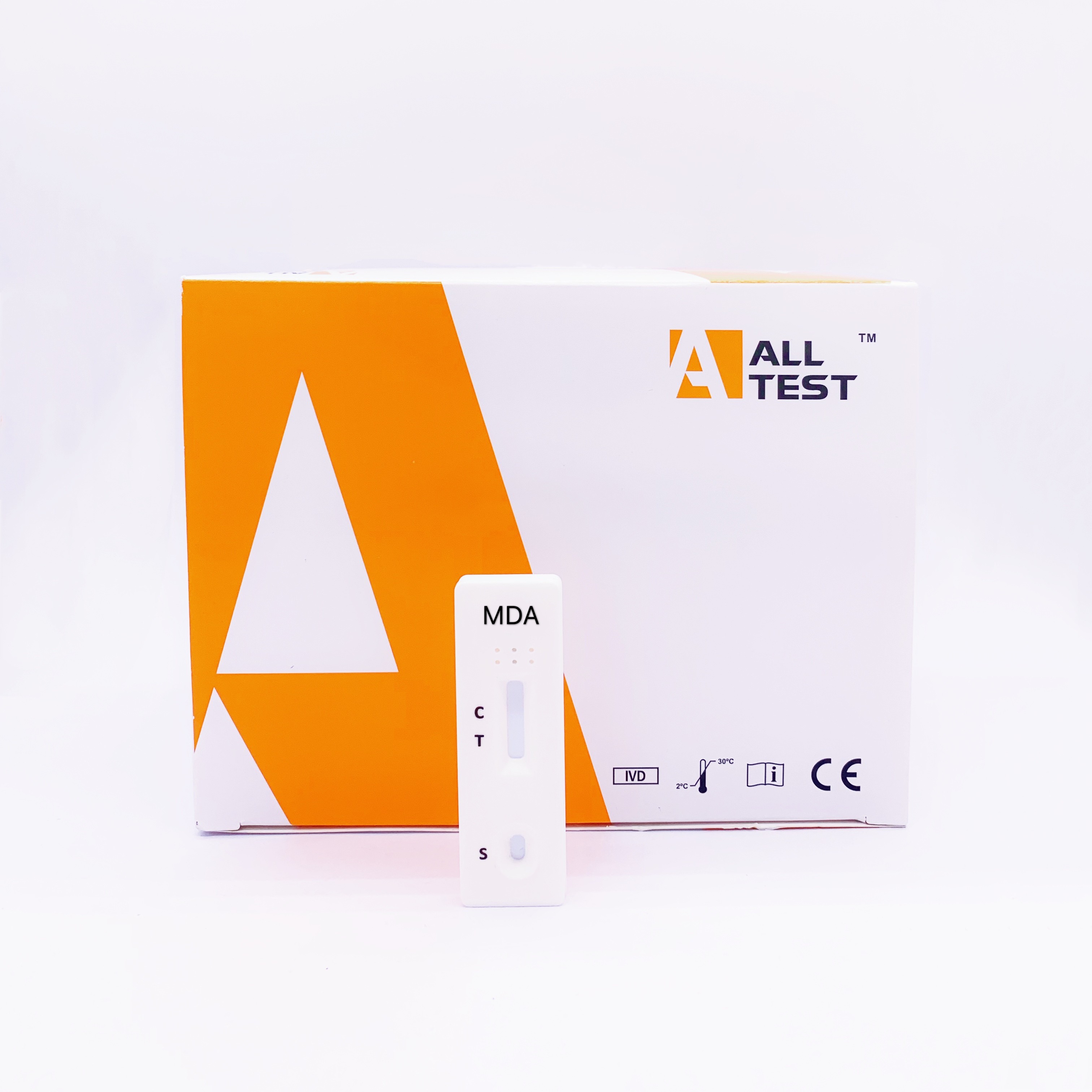 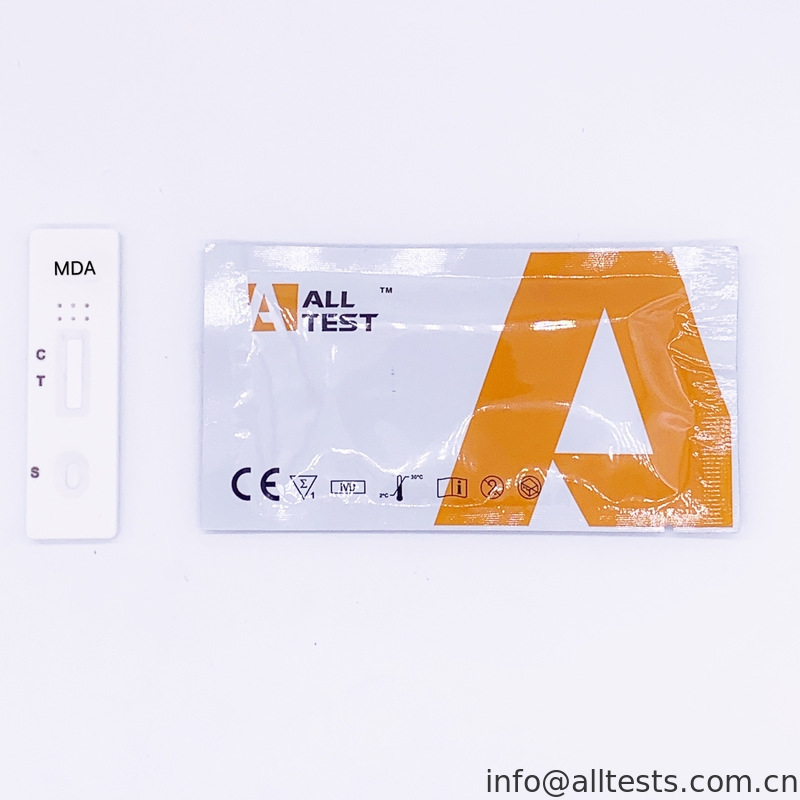 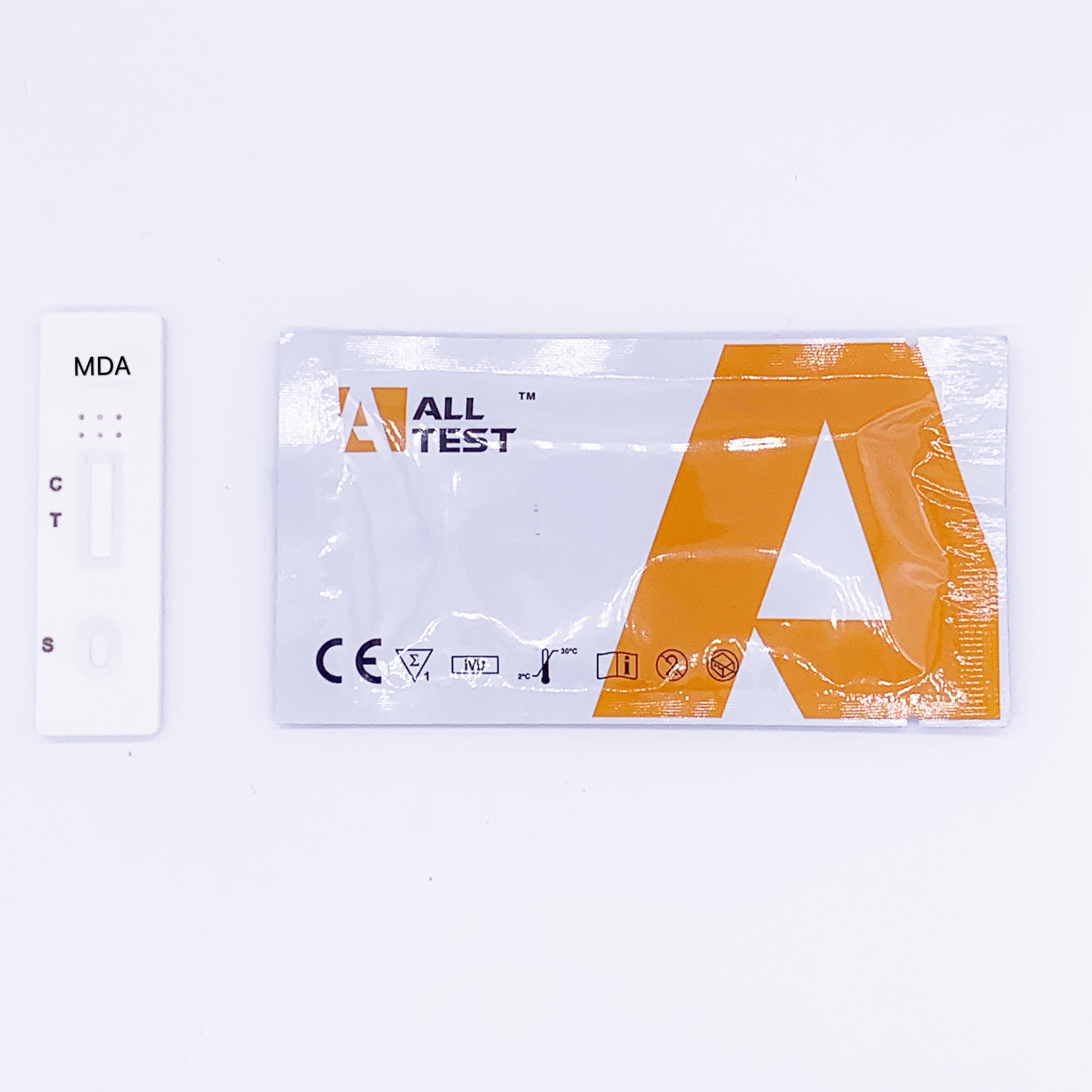 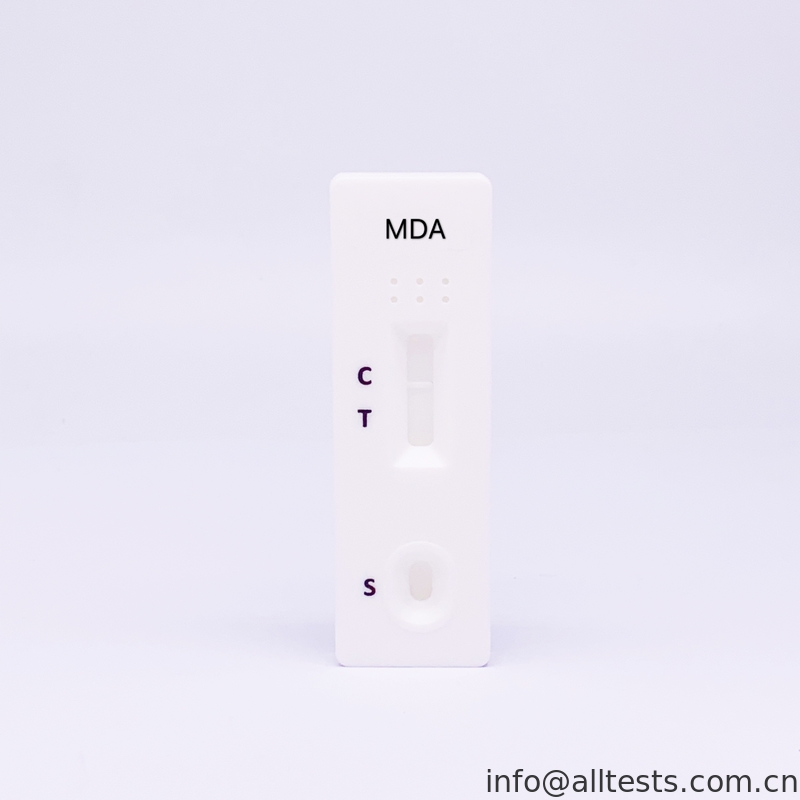 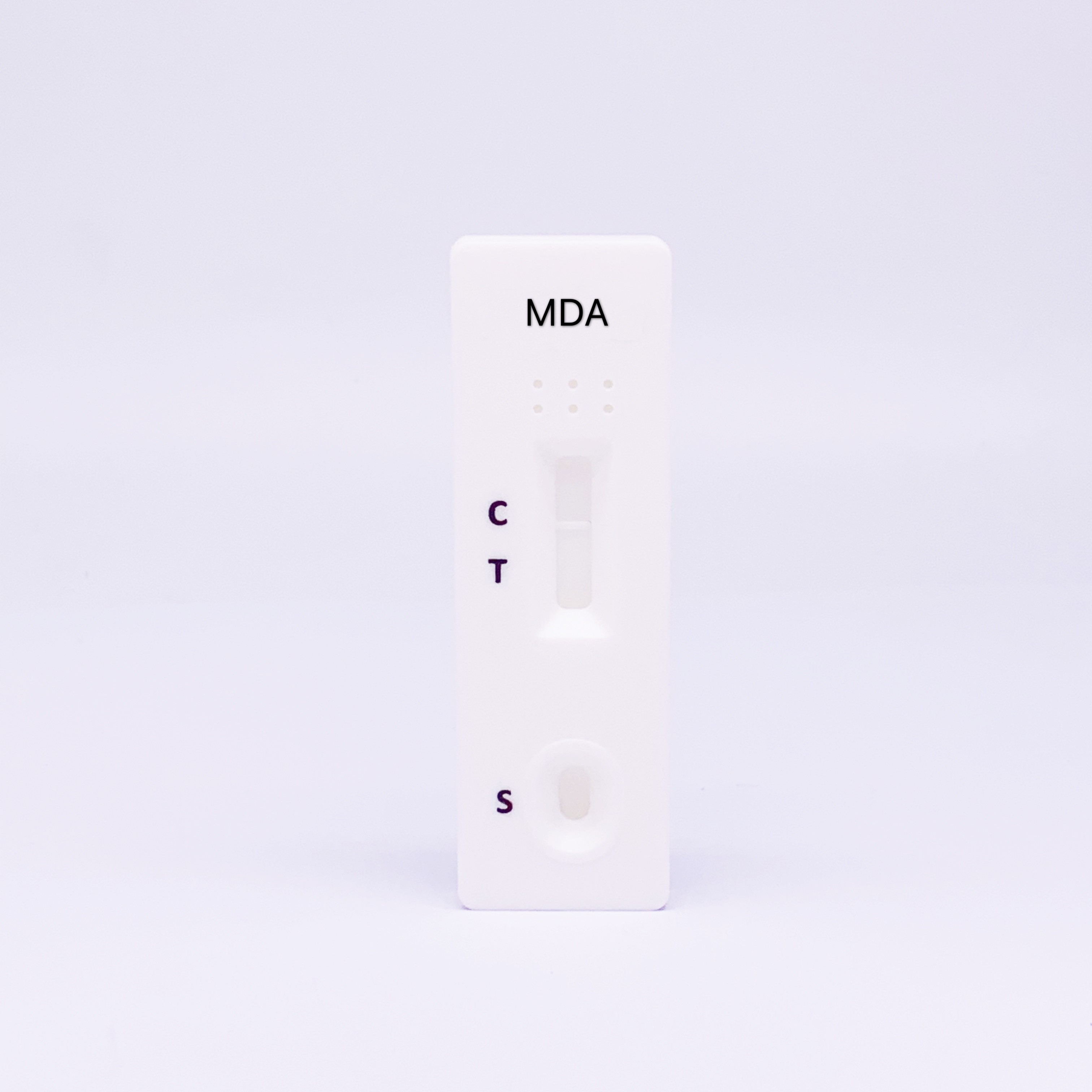 The MDA Rapid Test Cassette (Whole Blood/Serum/Plasma) is a rapid chromatographic immunoassay for the detection of 3,4-Methylenedioxyamphetamine in human urine at a cut-off concentration of 500 ng/mL. This test will detect other related compounds, please refer to the Analytical Specificity table in this package insert.
This assay provides only a preliminary analytical test result. A more specific alternate chemical method must be used in order to obtain a confirmed analytical result. Gas chromatography/mass spectrometry (GC/MS) is the preferred confirmatory method. Clinical consideration and professional judgment should be applied to any drug of abuse test result, particularly when preliminary positive results are used.

Methylenedioxymethamphetamine (ecstasy) is a designer drug first synthesized in 1914 by a German drug company for the treatment of obesity.. Those who take the drug frequently report adverse effects, such as increased muscle tension and sweating. MDMA is not clearly a stimulant, although it has, in common with amphetamine drugs, a capacity to increase blood pressure and heart rate. MDMA does produce some perceptual changes in the form of increased sensitivity to light, difficulty in focusing, and blurred vision in some users. Its mechanism of action is thought to be via release of the neurotransmitter serotonin. MDMA may also release dopamine, although the general opinion is that this is a secondary effect of the drug (Nichols and Oberlender, 1990). The most pervasive effect of MDMA, occurring in virtually all people who took a reasonable dose of the drug, was to produce a clenching of the jaws.

For whole blood specimen:
4. Bring the pouch to room temperature before opening it. Remove the test cassette from the sealed pouch and use it as soon as possible.
5. Place the cassette on a clean and level surface.
For Venipuncture Whole Blood specimen:
 Hold the dropper vertically and transfer 1 drop of whole blood (approximately 40μl) to thespecimen well, then add 2 drops of buffer (approximately 80μl), and start the timer. See illustration below.
For Fingerstick Whole Blood specimen:
 To use a capillary tube: Fill the capillary tube and transfer approximately 40μl of fingerstick whole blood specimen to the specimen area of test cassette, then add2 drops of buffer(approximately 80μl) and start the timer. See illustration below.
6. Wait for the colored line(s) to appear. Read results at 5 minutes. Do not interpret the result after 10 minutes.