Large Image :  Convenient To Use The Fast and Reliable Procalcitonin(PCT) Rapid Test Kits With CE

The PCT Rapid Test Cassette (Whole Blood/Serum/Plasma) is a rapid chromatographic immunoassay for the qualitative detection of Procalcitonin in serum or plasma.

Procalcitonin(PCT) is a small protein that comprises 116 amino acid residues with a molecular weight of approximately 13 kDa which was first described by Moullec et al. in 1984.PCT is produced normally in Ccells of the thyroid glands. In 1993, the elevated level of PCT in patients with a system infection of bacterial origin was reported and PCT is now considered to be the main marker of disorders accompanied by systemic inflammation and sepsis. The diagnostic value of PCT is important due to the close correlation between PCTconcentration and the severity of inflammation. It was shown that “inflammatory” PCT is not produced in Ccells. Cells of neuroendocrine origin are presumably the source of PCT during inflammation.

For Fingerstick Whole Blood specimens:
To use a capillary tube: Fill the capillary tube and transfer approximately 50 μL of fingerstick whole blood specimen to the specimen well (S) of the Test Cassette, then add 1 drop of buffer (approximately 40 μL) and start the timer. See illustration below.
3. Wait for the colored line is appeared. The result should be read at 15minutes. Do not interpret the result after 20 minutes. 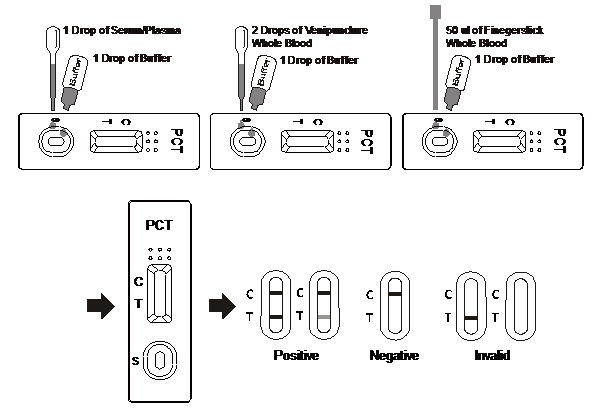